Llandeilo itself appears to have had no settlement before the Romans came here, however Garn Goch was a major fortified settlement going back to Neolithic times. 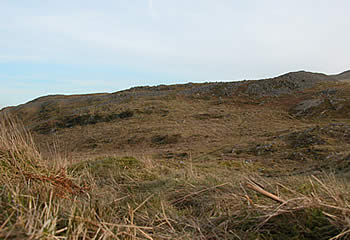 Garn Goch is an Iron Age fort with Bronze Age origins just above the little village of Bethlehem, between Llandeilo and Llangadog. Here is a brief history of the fort to aid the visitor who might want to take a little walk to the site. As well as offering a glimpse into the past of this little corner of Wales and the Tywi valley, it offers, too, a splendid view of the surrounding countryside for miles around. (Garn Goch takes its name of Red Hill from the colour of the bracken in the autumn.)

Features of camp:
Date of construction of main camp in its present form:
between AD 47-78.

The three campsites were probably occupied as defensive positions and settlement sites in the early Bronze Age, 2000-1400 BC. In the Iron Age, (500 BC to the Roman period), the fortifications became more extensive and sophisticated with increased tribal unrest and warfare among the westward-moving Celts and the descendants of the Bronze Age 'Beaker' people. The Celts with their warrior cult and their iron weapons, chariots and mounted horsemen, were a vigorous and rapidly expanding group of peoples who brought their own distinctive culture to the British Isles.

The Garn Goch dominates the boundary between the Dematae and Silures tribal areas. The Silures occupied, at the time of the Roman invasion, the whole of South-Wales from the Severn to the Towy. The Dematae held domain over south-west Wales (west Carmarthenshire and Pembrokeshire). To the north of both areas the main, and possibly more numerous, tribes were Ordovices.

The Silures were the most aggressive tribe and gave the Roman invaders the most trouble to subdue. There is some evidence that the Dematae were willing to submit to the Roman yoke and ally themselves against their old enemies the Silures.

Soon after the Roman invasion in AD 43 and the Roman thrusts into Wales across the Severn in AD 47, Garn Goch was probably rebuilt and strengthened to meet any threat from the Towy Estuary and westwards. Also, from the Romans striking down from the north through the comparatively open countryside and easy going terrain of the Black Mountain.

We know the names of two Romans and one Celt who probably walked within these walls and they are:

A particularly striking example of an iron-age hill fort, and one of the in Wales, can be found in the West of the national park at Garn Goch. It is impressively located on a hilltop whose presence dominates the surrounding countryside This choice location at 700 feet above sea level (213m) offers the visitor today not just an opportunity to walk around and explore the remains of the hill fort with its massive stone defences, but to partake of the excellent panorama. The twenty-eight acres of land on which it stands was purchased by the national park authority in the 1980s. Garn Goch translates as the red cairn. The reference to a cairn almost certainly refers to a large prominent burial mound within the main enclosure. Some writers have speculated that the red may refer to the colour of the surrounding bracken in autumn and winter when bathed in the sunlight this prominent hillside benefits from.

Hill forts may be constructed differently, depending on the materials that are available. Garn Goch is the finest example of a hill fort with extensive storm wall ramparts. In Garn Goch construction follows the contours of the hill on which it is built and this, of course, enhances the protection offered by the ramparts. The stone ramparts are extensive and exposed. As a result of the ravages of over 2000 years of weather they now consist of loose fallen stones. Impressive as it is today, at the time of completion in prehistoric Wales Garn Goch must have been a sight – and a site – to behold, and unequalled anywhere in the area.

There are actually two hill forts at this location, known appropriately as Y Gaer Fach (the small fort) and Y Gaer Fawr (the large fort). They occupy two separate summits on the same long ridge and the geographical description implicit in their name allows you to easily identify which is which.

Y Gaer Fach (SN 685242) is the smaller of the two hill forts and is generally in a more dilapidated condition. There are several places along the perimeter of the hill fort where stones that formed the original ramparts appear to be missing. It is not clear whether the stones have been removed at some stage, or whether this is an indication that this small fort was never completed. On the eastern side of the fort, a long track formed by walls that have collapsed appears to indicate an entrance of some kind. This entrance faces the direction of the larger hill fort.

Access Garn Goch is found in one of the remotest parts of the Brecon Beacons national park (Grid reference SN 690 243). Make your way to the hamlet of Bethlehem, three to four miles outside the small town of Llangadog. Just outside Bethlehem a narrow single-track road, steep in places, and inaccessible to coaches larger than a minibus, traverses for approximately 1 1/2 miles, until reaching a small area of grassy bank near the entrance to Crug Glas farm. There is very limited parking for vehicles at this point. From that point a steep rough track can be followed until it brings you to the first of the stone ramparts. Exploring the large area covered by this hill fort is quite challenging. The ground is very rough underfoot and the ramparts now consist of loose stones which constantly move under your feet and considerable care needs to be taken.

Bethlehem is a little hamlet in the remote southwest corner of the Brecon Beacons National Park. The name of the hamlet is derived from Bethlehem nonconformist chapel. The hamlet is of particular interest to stamp collectors and others at Christmas time because the small post office sells first daily covers, and their Christmas post is franked with the name Bethlehem. It is the closest community to the iron age hill fort at Carn Goch.

The Brecon Beacons National Park is rich in archaeological remains not least of which are the prehistoric settlements usually referred to as hill forts which are found at high level throughout National Park. These hill forts are more properly described as fortified settlements which were built by the Celtic tribes of the iron age. Extended families and their animals would have lived in these fortified settlements. In the daytime the animals would be outside grazing on the rich upland pasture, while the more sheltered land would be cultivated. The castles built in Wales at a later date by Norman gentry were intended to control the surrounding area. It seems more likely that the hill forts or fortified settlements had more in common with a fortified house of Tudor times. This would suggest that they were occupied on a more or less permanent basis. Many would have represented the form of an extended family, whereas some of the larger hill forts may well have become centres of trading, possibly offering specialist services such as metalworking or may even have had a political function. The construction of very large hill forts such as Garn Goch suggests a level of manpower and co-operation that far exceeds the resources of a single family.